skip to Main Content
Bill & Coo-king in Zurich!
Back to All 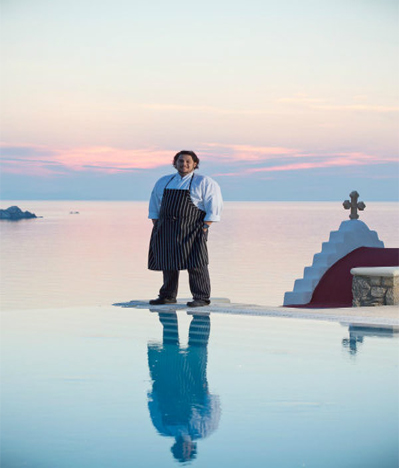 What Greece tastes like? How many Aegean saltiness and color fit on a plate? And how spicy the culinary culture of Cyclades can be?’

The winds of Mykonos along with Bill & Coo’s (HotelBrain’s managed hotel) Executive Chef, Athinagoras Kostakos, go to Zurich and give us all the answers, at  the most cosmo-party of this summer. “Mykonos 2013 Back to the Roots’, in Kaufleuten Club in Zurich, this Saturday, 1st of June!

The haute Greek cuisine and the high society of Switzerland meet this Saturday, June 1st, in Zurich, at the most “white and blue” party of this summer.

The heart of “Mykonos 2013, Back to the Roots”  beats this year in Kaufleuten Club, in Zürich and is already preparing to welcome its loyal jet setters.

Mykonos 2013, Back to the Roots’s… promising “dressing”, though, is the participation of Athinagoras Kostakos, Executive Chef of Bill & Coo, who is ready to tickle the palates of its famous guests.

Shortly before his check in, Athinagoras is telling us:

To convey as much as it gets Myconean and Greek Cuisine, presenting real homemade food in the center of Zurich, for about 700 guests, (all jet setters of the business community in Switzerland)

What is the concept of the dishes that you will present?

Greece … a la Cyclades. With many modern elements, like the ones we serve at Bill & Coo. Simple flavors, with a twisted food styling.

Which Greek element are you carrying in your luggage?

The wild nature of the island. The Kritama, the Capers, the Thyme, the Savory.., all gathered from the northern beaches of Mykonos, will give a touch of real Cyclades.

What feelings do you want to bring back?

Definitely the feeling of success. The positive energy of the smiling faces. And of course new ideas for the next culinary steps of Bill & Coo abroad. I feel a bit like an ambassador of the fine Greek cooking waiting  to find favorable ground for…  tasty negotiations!